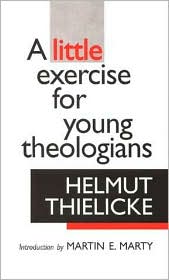 Sometimes short books can be the best books. A long, windy writer can often simply be long and windy, not deep and profound. I have tried to read some shorter books/pamphlets lately. These are great fillers when you have a few spare minutes. The other advantage is you can actually finish them and feel like you are accomplishing something.

I recently read A Little Exercise of Young Theologians. It is an excellent book and worth a read by anyone involved in theological study. Also it is only 41 pages. You get the impression that the author believed in some liberal views of the Scriptures, but this is a minor part of the book and should not keep you away.

Professor Thielicke, like an expert surgeon, dissects the various diseases that afflict young theologians and pastors. He uses the illustration of a young man returning from his early seminary studies and a Christian friend asks him a question about the Bible. Here is how Thielicke describes the young theologian’s response. “Under a considerable display of the apparatus of exegetical science and surrounded by the air of the initiated, he produces paralyzing and unhappy trivialities, and the inner muscular strength of a lively young Christian is horribly squeezed to death in a formal armor of abstract ideas.” (p. 8) He goes on to describe how often young men use theology to destroy instead of build.

Later he describes what he calls “theological puberty.” That stage when a young man has lots of ideas running around in his head, but little actual experience. He says, “There is a hiatus between the arena of the young theologian’s actual spiritual growth and what he already knows intellectually about this arena.” In other words, he knows a lot about weapons, but hasn’t done much actual fighting. Thielicke goes on, “So to speak, he has been fitted, like a country boy, with breeches that are too big, into which he must still grow up…meanwhile they hang loosely around his body, and this ludicrous sight is of course not beautiful.” (p. 10)

He ends by pointing to the need for a Spirit filled life if a man is to be true theologian. “Whoever ceases to be a man of the Spirit automatically furthers a false theology, even if in thought it is pure, orthodox and basically Lutheran. [Thielicke was a professor at Lutheran Seminary.] But in that case death lurks in the kettle.” (p. 36) “But it is all the more important to insist constantly and almost monotonously that a person who pursues theological courses is spiritually sick unless he reads the Bible uncommonly often and makes the most of opportunities by which, in preaching and Bible classes, that cornerstone is made visible.” (p. 40)

I found this book an excellent reminder of the dangers of theology. Theology is a great tool, which can be used for great good, but it must be used with wisdom, discretion and good dose of the Spirit. Thielicke’s book exposes those sins masked as knowledge and virtue that theologians so easily commit. Read it with good dose of prayer and confession.