Most Blessed Among Women is Jael 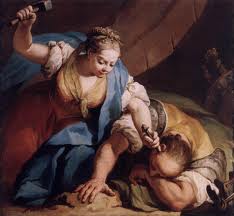 Several thoughts occurred to me as I read the story of Deborah, Barak, and Jael this morning in Judges 4-5.
First, did Jael go against her husband by killing Sisera? It is hard to tell, but in 4:11 Heber has separated himself from the rest of his family. 4:17 says there was peace between Jabin King of Hazor and Heber the Kenite. From this information it appears that Jael killed the man her husband was in league with.
Second, the assassination of Sisera is well planned by Jael. She coaxes Sisera into her tent (4:18) by telling him that he has nothing to fear. He asks for water and she gives him milk (4:19). The song (5:25) tells us that she gave him milk in a lordly bowl (NKJV) or noble’s bowl (ESV). She was appealing to his vanity. She knew exactly what she was doing.
Third, the courage of Jael is easy to overlook. If Sisera awakes she is a dead woman. Was her hand shaking as she picked up the hammer? When her husband returns she might face his wrath.
Fourth, I love the phrase at the end of verse 21, “So he died.” Typical understatement. The man has a tent peg sticking out of his head.  Do you need to check the pulse of man with a tent peg driven through his skull?
Fifth, Jael’s killing of Sisera echoes the promise that the seed of the woman will crush the head of the serpent in Genesis 3:15. There is another man killed by a head wound in Judges as well. In Judges 9:53 a woman throws down a millstone and crushes Abimilech’s head.
Sixth, the song in chapter 5 is more explicit about Jael’s deed than the story. It says she pounded Sisera, pierced his head, split and struck his through his temple (NKJV). My mind wanders to how big the tent peg was. Could it actually have split his head in two? I think our sanitized PG minds miss how violent an act this would have been.
Finally, is there anything less politically correct than the end of Deborah’s song? Here we have Sisera’s mother sitting at home on the porch rocking in her chair.  She is surrounded by her friends. She is wondering why her son is so long coming home. Her friends say that it is because the victory has been so great that they are still dividing the spoil. But we all know the truth. Her son was killed by a woman, in a tent by a tent peg. His head was split while he slept. His death was not noble. He was a disgrace. He is now buried or burned in a foreign land and will be forever remembered only in these two chapters of Scripture. Aren’t we supposed to feel bad for Sisera’s mom? She has lost a son. Aren’t we supposed to grieve for her? Apparently not. So may all the enemies of God perish (5:31).

One thought on “Most Blessed Among Women is Jael”