Why Should You Marry Her? 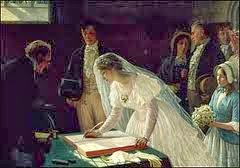 Steven Ozment commenting on the difference between choosing a marriage partner in the Reformation and choosing one today. All punctuation is his, except the brackets.

Here we find a distinctive feature of early modern marriage [Reformation] that distinguishes it from modern practice [20th Century]. Physical attraction and emotional love were not viewed as essential conditions for marriage, although few doubted that they played a role; the love that drew husband and wife together was a mutual willingness to make sacrifices for one another, hence, a duty that developed within marriage. Such love emerged most readily between spouses who at the outset found one another worthy of respect and trust. Not “Do I desire and want this person?” but “Do I find this person honorable and companionable?” –that was the central question for a successful marriage.  For how could one make sacrifices for or become affectionately attached to a person one did not first respect and trust? Unlike the modern romantic approach to marriage, in which one “loves” another in spite of irreconcilable personal, religious, and/or social differences, the marriage counselors of Reformation Europe urged people to seek mates they believed they could learn to love because they first respected their persons and shared common values.

It is interesting how opposite this is to today’s practice. We believe emotional love and physical attraction can overcome anything in marriage. Thus people think they can cross all sorts of boundaries, religious, economic, and social in marriage and everything will be fine. We see this all the time in the movies, where the rich guy falls in love with poor girl, etc. The reformers would not have refused to marry people from different strata, but they would have advised against it. We do not live in the exact same context as the reformers, but there is some wisdom in how they encouraged people to marry who came from similar economic, religious, and social backgrounds. But I must add there are times that the background should be ignored. John Calvin, a die hard paedobaptist, married a former Anabaptist. Luther married a nun. Wisdom is required.