The Flash and Fornication

My family has been watching The Flash  on Netflix.  Overall we have enjoyed the show. It is difficult to find shows that most of my kids (ages 5-16) will enjoy.  The Flash is not as well-written as some more adult oriented shows (i.e. Daredevil,  Breaking Bad), but it is suspenseful and fun.  I recommend it. But as my title indicates, I am going to pull out a negative aspect of the show. After all, I am a Calvinist. That is what we do.

One part of the show that bothers me is the fornication. The show assumes that a couple will sleep together and usually quickly. (None of this explicit, at least as far as we have watched. It is all implied.) One character gets a small box from her boyfriend. What was in that box? My younger son guessed an engagement ring. An older son was wise enough to know better. Engagement and marriage are not part of a single’s worldview in our age. It ended up being a key to his apartment. She has been sleeping off and on in his apartment since they started dating but now they are going to live together. The girl’s father is heartbroken over her leaving home. This used to be how fathers reacted to a marriage proposal. Now they react that way to their daughter leaving home to go sleep with a man who refuses to commit to her. Another example, Barry, aka The Flash, is on a second date with a girl and they begin making out, which had it not been interrupted by a bad guy, would have certainly led to sex. The underlying assumption is that singles will sleep together. That is just what happens. 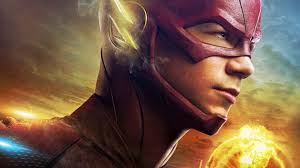 What is most frustrating about shows like The Flash is they do not take sex seriously.  Sex does not mean anything really. There are no long term consequences, such as babies. There is no sense of betrayal or loss or shame or guilt or even rebellion. They try to treat it with respect, but it falls flat. It is hard to treat something with respect that has no power, causes no problems, and is not limited in any way. Sex doesn’t matter.  I do not watch a lot of TV shows, so my sampling is pretty small but my guess is it is common in other shows besides The Flash. Sleeping around, especially among singles, is like decoration. It is just there.

There are a couple examples of sex being taken seriously in TV shows, but usually these are in the context of a marriage. Two examples that come to mind are the adultery of Skylar White in Breaking Bad and the adultery of Woody Harrelson’s wife in True Detective. In both cases adultery was rebellion by the women involved. The men were destroying their marriages so the women had affairs. My guess is many Christians would find the depiction of adultery in shows like Breaking Bad more offensive than the fornication in shows like The Flash.  But I think the opposite. The depiction of adultery in those shows indicates that sex means something, which is closer to the truth than the round robin fornication with no consequences we see in many shows. But again this was in the context of an already existing marriage. I have not seen a show where fornication, sex before marriage, is taken seriously and has long-term ramifications for a person’s well-being and future. Single people have sex and move on.

If there is fornication in a TV show or a a movie, at least make it mean something. But I am not sure our culture can do that.  Sex has lost all meaning in our age. What kind of sex has lasting consequences in our age? Rape and pedophilia. According to our culture, these sexual acts leave scars. Other sexual acts do not.  Prostitution, fornication, adultery, and sodomy are “normal.” It is like choosing what to eat or buying a new piece of furniture. It takes some thought, but matters little in the end. I realize this is simplistic. But overall do you get the impression from TV shows that sex, in particular fornication, is a big deal? When someone decides to sleep with someone else is it a big decision with lasting affects?

When sex is limited to marriage and a man and a woman it retains its power and glory, but it is also normal. Every married couple does it (at least I hope so!) and yet that sexual bond is the sin qua non, the absolutely essential thing necessary, for the covenant relationship between a man and a woman to exist. Like many of the best things in life sex in marriage is both grand and glorious and as normal as the sun rising. But for the world sex must either be this great idol (think porn or many romantic movies) or it must be meaningless. As Christians, who keep sex in its proper bounds, we don’t have to choose between the two. We can have our cake and eat it too.