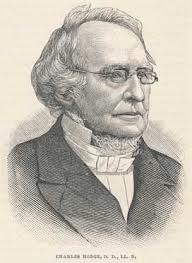 Last week the local newspaper here in Morgantown, The Dominion Post, wrote an editorial disparaging a new homeschooling law, which gives homeschoolers more freedom in their educational choices. I plan on responding to the article as well as writing several blog posts explaining why Christians must give their children a Christian education. In the meantime, here is a blog post I wrote in December 2012 which should help prime the pump. The initial quote is from Charles Hodge’s commentary on Ephesians. Hodge was a professor at Princeton in 1800’s, when it was still Christian. He was of the great American reformed men in 1800’s.

“This whole process of education is to be religious, and not only religious, but Christian. It is the nurture and admonition of the Lord which is the appointed and the only effectual means of attaining the end of education. Where this means is neglected or any other substituted in its place, the result must be disastrous failure. The moral and religious element of our nature is just as essential and as universal as the intellectual. Religion, therefore, is as necessary to the development of the mind as knowledge. And as Christianity is the only true religion, and God in Christ the only true God, the only possible means of profitable education is the nurture and admonition of the Lord. That is, the whole process of instruction and discipline must be that which he prescribes and which he administers, so that his authority should be brought in constant and immediate contact with mind, heart and conscience of the child.  It will not do for the parent to present himself as the ultimate end, the source of knowledge and possessor of authority to determine truth and duty. This would be to give his child a mere human development. Nor will it do for him to urge and communicate every thing on the abstract ground of reason; for that would be to merge his child in nature. It is only by making God, God in Christ, the teacher and ruler, on whose authority every thing it so be believed, and in obedience to whose will every thing is to be done, that the ends of education can possibly be attained. It is infinite folly in men to assume to be wiser than God, or to attempt to accomplish an end by other means than those which he has appointed.” (Charles Hodge on in his commentary on Ephesians 6:4)

Hodge makes some excellent points in this paragraph, a couple of which I would like to draw you attention to.
First, education must include the will and the moral character if it is to be called education at all.  I would add that education will be religious and moral in nature. The only question is will the religion be explicit or hidden. Public schools train our children to worship and form their moral character all the while claiming that they are morally neutral.
Second, God, since he is the only God, is the only right source of education. To try to gain a proper moral formation apart from God is like doing heart surgery with a butter knife.
Third, notice how Hodge says that the child’s heart, mind, and conscience must be brought into constant and immediate contact with God’s authority. This is a paraphrase of Deuteronomy 6:7. And here is why an education that excludes the Lord is a lie and is no education at all. God really does rule the world through His Son Jesus Christ and we really are to trust in Him and obey him and his Word really is the foundation for everything. To eliminate God’s authority from education is to eliminate the primary lesson that is to be learned.
Fourth, God is to set the curriculum. That curriculum is to make our children like their Savior Jesus. That does not eliminate math or science or literature. But it does eliminate math or science or literature without Jesus.  This also means that returning some vague, amorphous “god” to public education is not sufficient.  It must be “God in Christ.” This also means the goal of an education is not to pass a test, get a job, get to college or make a lot of money.
Fifth, any attempt to educate our children any other way is infinite folly and is a guaranteed disaster. We cannot eliminate the Creator and the Savior from our education and not also ultimately eliminate wisdom and joy and beauty and truth and righteousness.