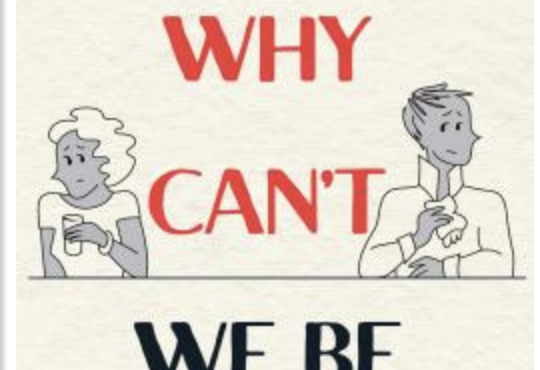 Earlier I wrote that one basic problem with Mrs. Byrd’s new book, Why Can’t We Be Friends,  is she does not prove that the problem she is addressing, that of men and women in the church not being friends because the church has adopted a worldly mindset, actually exists in large enough numbers and is taught by a large enough group of leaders to be a major issue in the evangelical church. As I read, I found it hard to nail down exactly what she wanted us to do or think. The book meandered a bit and much of what she said, especially in the second half, all parties agree with. So this post is a bit boring, but my goal is to state clearly what I think she is trying to accomplish.

Here is what she cannot be proposing:

First, she cannot be proposing that men and women should become friends in group settings. Most men and women, even when married, are perfectly fine having friendships that are social and public. Couples having dinner together or groups meeting together in a social setting would not violate anything I have read from those opposed to Mrs. Byrd’s suggestions. Most men I know are happy to talk to women in a  public, social setting.  Our church is super-patriarchal, yet we talk with opposite the sex after church, at church picnics, etc.

Second, she cannot be proposing that men and women should work together vocationally. Again, who is saying that men and women should not work together? Perhaps there would be  (and should be) some discussion when there are late nights at the office or road trips. But the idea of men and women working together, even a pastor and female secretary alone at the office for eight hours, is rarely if ever opposed.  I would be overjoyed if work places were a lot less coed. But no doubt I am in a very, small minority.

Third, she cannot be proposing that singles should have opportunities to meet one on one, such as a date. (One of the problems with this book and at least one review I read is they equate developing opposite sex friendships when single and doing the same thing when married. They are different for one obvious reason: the person is no longer single.) There are courtship advocates who may go so far as to say a single man should never be alone with a girl. But that is not the norm. Most of the evangelical church, reformed church, and even courtship advocates are fine, to varying degrees,  with singles being alone with each other on dinner dates, going to movies, driving, etc.

Fourth, despite Douglas Wilson’s tweet about not helping a woman unless her bone was sticking out, I think most men, including Doug, would gladly help a woman if she needed it. I doubt the main point of this book is that men should help women who have flat tires or need their groceries loaded in their trunk.

She cannot be proposing that Christian men and women should be friends in a public, social setting, that they should work together, that singles should spend time together, or that in certain situations where someone requires help sex shouldn’t matter. Why? Because none of these are real problems. What is her goal then?

What Exactly Is She Proposing?

Mrs. Byrd’s surface disagreement or launching point is the Billy Graham rule, which is that men refuse to be alone with women other than their wives. But her book is too long, her exegesis too lengthy, and her condemnation too great  for the goal to be to get married men to occasionally have dinner with women who are not their wives. Her main goal is not to get rid of the Graham rule. Her main point is that friendship between the sexes in the church must change.  Despite her subtitle, her aim is more far reaching than abolishing the Pence rule.

What  is she proposing? There are three goals:

First, that men should be able to have close, non-sexual, long-term friendships with women who they are not married to. When you pull away all the talk about the Pence rule and other specifics what Mrs. Byrd wants to do is change our mind and practice so that Christian men and women are free and encouraged to develop long term, non-sexual, private to semi-private, friendships with members of the opposite sex. As far as I can tell, this is her goal.

Second, her proposal advocates that all parties involved should be comfortable with these types of platonic, non-married friendships, assuming there is no sin involved.  In other words, a husband should not be upset that his wife has developed a friendship with another man. A pastor should not be concerned if he finds out Mrs. Smith and Mr. Green are spending time together, texting each other, talking on the phone, and having dinner together. A wife should not care if her husband is regularly having dinner with another Christian woman.

Some might scream in protest that she doesn’t really mean this. Mrs. Byrd puts up some boundaries such as a wife making sure her husband and friend are not spending too much time together. But this has nothing to do with the fact that it is a female, but only about the amount of time.  Just as you can spend too much time at the lake with your best male friend you can spend too much time going on walks with your spiritual girl friend. If you are sexually tempted by someone you should avoid them (more on this later), but otherwise it is a go. Her language throughout is clear. A person who opposes these types of friendships is undermining the gospel, acting like the Levite in the story of the good Samaritan,  and does not understand how the New Testament and Jesus turned our relationships upside down.

Some may argue that this is not what she is proposing. To which I respond, if not then what exactly is she saying? If she does not want what I have described, then what is it she does want? Do not tell me she is just encouraging regular interaction between men and women.  We are drowning in regular interaction with the opposite sex. There is no shortage of it in our culture, including churches.  Do not tell me it is just a shift in the way we think. It is that. But it is a shift aimed at something practical and visible. Her aim is to make close friendships between non-married members of the opposite sex, normal, accepted, and promoted in the church. I do not think she is simply aiming at making sure men don’t feel guilty about having dinner with a co-worker. She does want that. But the second half of the book is her “exegesis” of why these types of friendships are vital to Christians, their churches, and the watching world. Friendships between men and women who are not married are an essential part of the gospel according to Mrs. Byrd. Without them we are not really honoring Christ our Elder Brother.

Once we understand her proposal we see what a fundamental, sea change Mrs. Byrd is recommending. She is upending 2000 years of church teaching and practice as well as the teaching and practice of most human societies, on how men and women should interact. In later posts, I will address why her proposal is dangerous, is built on faulty exegesis and logic, misses the necessity of propriety even when sexual temptation is not present, and is unnecessary. But for now, it seemed important to nail down exactly what she is recommending.