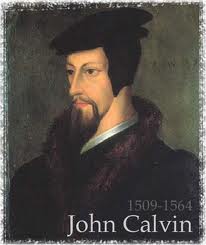 According to David W. Hall, here are the final five ways Calvin influenced the modern world.

1. Decentralized Politics: “Calvin shaped polity, which appeared to be either liberal or daringly democratic for its day, provided checks and balances, separation of powers, election by the residents, and other elements of the federal structure that would later be copied as one of Geneva’s finest exports.”

2. Parity Among All Professions: “Another of the culture-shaping aspects of Calvin’s thought was his emphasis on the sacredness of ordinary vocations. Before Calvin and the Protestant Reformation, the doctrine of vocation or calling was thought to be exclusively for the clergy. However, Calvin’s view of work as having inherent dignity given by our Creator elevated all disciplines and lawful vocations to the status of holy callings.  One could, after Calvin, be called to medicine, law, or education just a a clergyman was called to serve the church.”

3. Economics and Profit: “Wherever Calvinism spread, so did a love of free markets and capitalism.  If one valid measurement of leadership is its impact on its immediate environment, one might well compare the socio-economic difference in Geneva before and after Calvin…Prior to Calvin’s immigration (1536), Geneva had 50 merchants, 3 printers and few, if any nobles.  By the late 1550s, Geneva was home to 180 merchants, 113 printers and publishers, and at least 70 aristocratic refugees who claimed nobility.”

4. Music in the Vernacular: “One of Calvin’s early initiatives was to translate music designed for use in public worship into the language of the day…Calvin wanted everyone who participated in worship, not only the clergy, to be able to understand and reiterate the truths of Scripture-this time in poetic structure. His democratizing of holy song and other elements of worship made parishioners participants in the divine liturgy; simultaneously, it also boosted the endeavors of artists.”

5. The Power of Publishing Ideas: “If Martin Luther seized on the potential of the printing press, Calvin and his followers elevated the use of the press to an art form.  With the rise of the Gutenberg press, Reformers seized the new media with a vengeance to multiply their thought and action plans. Perhaps no first generation Reformer seized the moment quite like John Calvin…So successful was Calvin’s city at spreading the message in print that all books published in Geneva were banned in France [which was Roman Catholic] beginning in 1551″