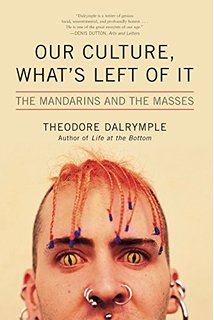 Theodore Dalrymple is the pen name of a retired British doctor who worked in a prison and a low-income hospital, as well as in Africa. He is a also a writer, a very good writer. I am currently reading his book Our Culture, What’s Left of It. It is a series of essay on various topics. All budding short essay writers would do themselves a great service by reading the opening and closing paragraphs of each essay. He does a great job of introducing and concluding his writings.

Anyway, I am currently reading the essay title “The Rage of Virginia Woolf”, which  could be titled “The Rage of Every Die-Hard Feminist.” Virginia Woolf is a feminist heroine, whose novels are standard works in literature departments as well as women’s studies departments around the Western world. Dalrymple does not think Mrs. Woolf did much to help advance civilization, despite the love she gets from the intellectual elites in the West. Here are some of my favorite quotes from the essay.

[Mrs. Woolf’s book Three Guineas] is a locus classicus of self-pity and victimhood as a genre itself…The book might be better titled: How to Be Privileged and Yet Feel Extremely Aggrieved.

As a female member of the British upper middle class and one of what she called “the daughters of educated men,” she felt both socially superior to the rest of the world and peculiarly, indeed uniquely, put upon.

No interpretation of events, trends, or feelings is too silly or contradictory for Mrs. Woolf if it helps to fan her resentment…As ever wanting it both ways, she complains at one moment of exclusion and at the next, that inclusion is not worthwhile. She is like a humorless version of Groucho Marx, who did not want to be the member of any club that would accept him. What is a joke for Groucho Marx is serious political philosophy for Virginia Woolf.

Resentment playing so large a part in Mrs. Woolf’s mental economy, much of her intellectual effort went into justifying it. She is thus a very modern figure indeed, even though she died sixty years ago. Her lack of recognition that anything had ever been achieved or created before her advent that was worthy of protection or preservation is all but absolute along with her egotism.

For Mrs. Woolf, loyalty to herself was the only real, true loyalty.

It comes as no surprise that a thinker (or perhaps I should say a feeler) such as Mrs. Woolf, with her emotional and intellectual dishonesty, should collapse all relevant moral distinctions, a technique vital to all schools of resentment.

If the good life is a matter of judgment, the war [WWII] proved that all her adult life she had none. My mother, with her wrench by day and helmet by night [T.D.’s mother was a firewatcher at night and mechanic during the day during WWII] did more for civilization…than Mrs. Woolf had ever done, with her jeweled prose disguising her narcissistic rage.

Had Mrs. Woolf survived to our time, however, she would at least have had the satisfaction of observing her cast of mind-shallow, dishonest, resentful, envious, snobbish, self-absorbed, trivial, philistine, and ultimately brutal-had triumphed among the elites of the Western world.