I am getting ready to preach Hebrews 9 so I was looking at the structure of the Day of Atonement in Leviticus 16. What I found most interesting is that during the process the tabernacle was empty  (Leviticus 16:17). The tabernacle is completely empty and the high priest must go in and do all of this. 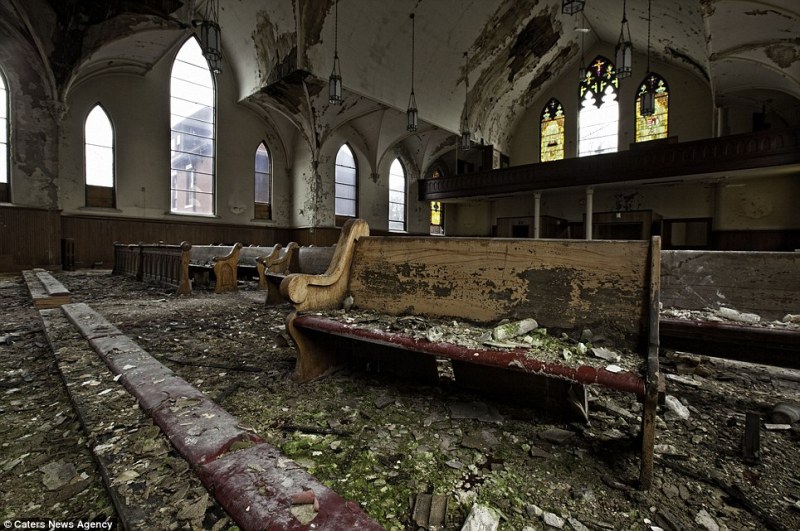 In their excellent book, Unchanging Witness, Professors Fortson and Grams spend a chapter recounting the capitulation of the numerous mainline denominations to the homosexual agenda, including the Episcopal Church and Evangelical Lutheran Church. But the account that caught my attention was the Presbyterian Church in the United States of America (PCUSA).

I am not an expert on the history of the PCUSA, but I believe there were serious issues, such as rejection of the authority of Scripture, rejection of the supernatural, and ordination of women, which preceded their acceptance of homosexuality. If true, their capitulation to the homosexuals was not a surprise. A denomination that ordains women is going to have a hard time barring the doors against homosexuals. Here is the timeline how the PCUSA moved to accepting gays, gay ministers, and eventually same sex marriage (Fortson and Grams p. 157-158):

1978-United Presbyterian Church in the USA adopts a policy forbidding the ordination of homosexuals, but allowing gays and lesbians into church membership.

1979-The Presbyterian Church in the US adopts a similar policy.

1983-These two denominations join to create the PCUSA. The policy from 1978 remains in force.

1983-1993 There was constant debate in the denomination about ordaining homosexuals. So much debate that in 1993 a ban was instituted to prevent the issue from being voted on for three years.

1998-Liberals again pushed for their substitute amendment. Again it was defeated though the votes grew closer. This happened again in 1999 and 2001. Each time the votes for the liberals grew.

2006-A PCUSA task force recommended allowing exceptions to the “fidelity and chastity” clause. This allowed homosexuals to be ordained.

2009-Again the liberals pushed for a vote to change the constitution. Again it was defeated though by the smallest margin yet.

2011-The language from 1997 was finally gotten rid of and openly gay persons could now be ordained to the ministry.

2014-The PCUSA approved a policy allowing pastors to perform same-sex marriages in states where the practice is legal. In that same year an additional vote was made that changed the definition of marriage from one and one woman to two persons. That passed by a 71% majority.

What I find fascinating is how “unrelenting” to use the authors’ word, the pro-gay lobby was. They never stopped bringing up the votes. They found ways around official policy, such as the 2006 task force. They kept pushing and kept fighting until they got what they wanted.  I am sure this began long before 1978, but even from 1978-2014 is a pretty long time. It reminds me of what Edwin Friedman said in his excellent book Failure of Nerve. Pathogens do not stop. They will not stop. They must be cut out. Long before sodomy ever became an issue someone within these denominations compromised on basic Christian teaching. It may have been the authority of Scripture. It may have been human sexuality. It may have been the denial of the resurrection of our Lord. But they compromised and here is the key no one disciplined them for it. Maybe they disciplined them the first time and second time and third time, but eventually they stopped, eventually the good guys gave up.

In the previous chapter Fortson and Grams discuss all the denominations that remain faithful to the Scripture’s teaching on homosexuality, such as the Presbyterian Church in America (PCA), the Evangelical Presbyterian Church (EPC), and Lutheran Church-Missouri Synod (LCMS). I look at those denominations and my own, the Communion of Reformed Evangelicals (CREC), and I pray. I pray that we can hold fast. I pray that we have the stamina and backbone to fight. I pray that we have the courage of our brothers in Africa who stood up to the Anglican bishops who compromised. I pray that we are not afraid of being hated, cast out, and maligned. I pray that we can preach faithfully what the Word says. I pray we have the strength to excommunicate when necessary. I pray that our seminaries fire those who compromise. For we can be assured of this; the homosexuals will not stop. Their goal is not live and let live. Their goal is that churches everywhere accept them as true Christians no matter their sexual practices. For the sake of Christ, his sheep, and the lost we must be as unrelenting as they are. If not we will end up just like the PCUSA and the proverb will be fulfilled:

Like a muddied spring or a polluted fountain is a righteous man who gives way before the wicked. (Proverbs 25:26)